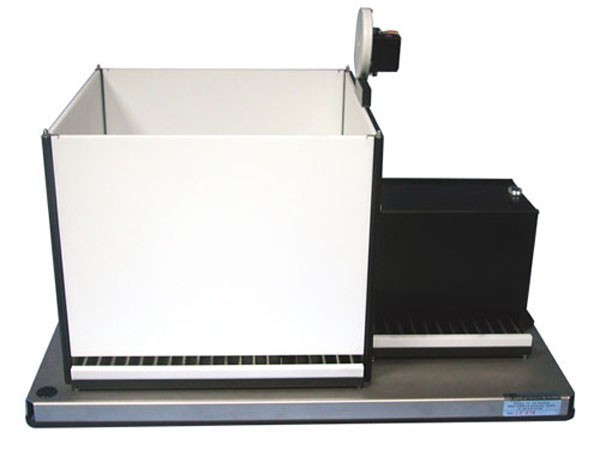 The inhibition of innate or learned behaviour by association with aversive stimulation has shown to be a very useful tool for researchers working in very different fields. From the study of the interference of drug treatments on a simple learning model to the study of the physiological mechanisms beneath learning or memory, passive avoidance reflexes studies have been used.

Many models have been proposed for these studies. However, among those most widely used, that suggested by Kurtz & Pearl in 1960 (J. Comp Physiol. Phycol. 53:201-6) and later modified by Bures & Buresova (J. Comp. Physiol. Phycol. 56:268-62, 1963) is proven. In this model, sometimes called ‘One-trial learning’, ‘Two-compartment test’ or ‘Memory test’ it is intended to inhibit, by aversive stimulus, the rodents tendency to abandon large, open and brightly illuminated spaces so as to hide in small dark ones.

The model has a set of variables of easy determination and control (i.e. entrance to the small compartment latency), offering, at the same time, an ample parameters spectrum whose effect can be studied (v. gr. the interval between the aversive stimulation and the retention test).

Passive Avoidance studies can be carried out by means of an experimental chamber that comprised of two differently sized enclosures, a big white one and a small black one, according to the original design.

In this experimental chamber, the animal’s position is detected by using weight gauges. This system, which uses high sensitivity weight transducers that range from 10 to 800 grams, provides more effective and reliable detection of animal responses (zones entries) than systems based on photocells beams or on grid floor displacements.

BIOSEB Passive Avoidance boxes may be controlled either through LE2708 Programmer or SHUTAVOID software.
The first option is recommended for one single box set-ups, and may be combined with SEDACOM software - which is limited to enable data transfer from the programmer to a PC through a RS232 port. It is not necessary the interface neither the use of board installed into the PC. The link is carried out by one only cable from one Box to the other. The first Box is connected to PC or Laptop by the port RS 232 or USB.
The second option is suitable for controlling a number of boxes simultaneously.