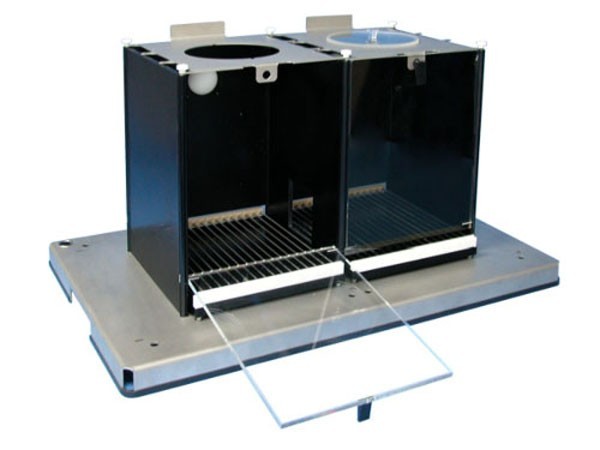 Basically, the BIOSEB Shuttle box (LE916-918) consists in two equally sized compartments with two independent grid floors.
A frontal door, in addition to the top ones, allows an easy access inside the box. The cage contains a general sound generator and a visual stimulus (light) for each compartment.

The Animal is detected by two Weight Transducers located above the static grids, avoiding the problems inherent to photoelectrical or grid tilting systems (high speeds of displacements in mice, tail detection in rats).

BIOSEB Shuttle box is thought to be easily set up and dismantled. Therefore, reconverting it to traditional Passive Box is quite straightforward by adding a sliding door (LE916D for mice or LE918D for rats). Furthermore, it is possible to set up different wall shapes or colours in order to further condition the subject of study either visually or spatially.

The shuttle boxes can be controlled by Programmer LE2708 or SHUTAVOID software. SEDACOM software can be used to transfer data from the programmer to a PC through a RS232 port.
It is not necessary the interface neither the use of board installed into the PC. The link is carried out by one only cable from one Box to the other. The first Box is connected to PC or Laptop by the port RS 232 or USB.The second option is suitable for controlling a number of boxes simultaneously.