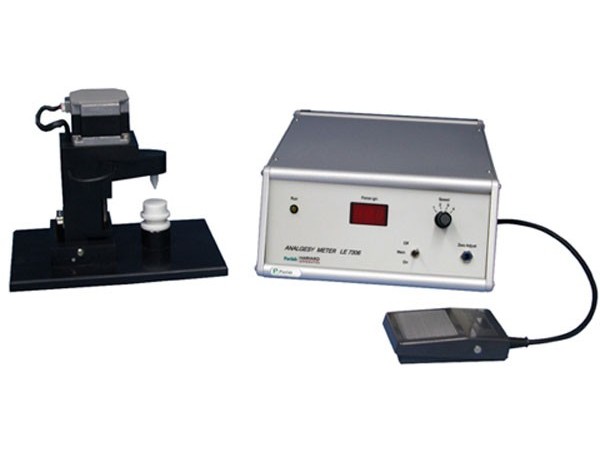 Availability:
Reference: LE7306
Determination of the animal threshold response to pain induced in the paw by the application of a uniformly increasing pressure

The Randall & Selitto test is based on determination of the animal threshold response to pain induced in the paw by the application of a uniformly increasing pressure.

Operating principleIn the BIOSEB rat paw-pressure, a stimulation unit allows the gradual increase (at selectable rates) of the pressure applied on the animal paw. The pressure increase is achieved by a step-motor inducing the progressive advancement of a sliding support with a distal conic tip (1 mm diameter).

The conic tip is mounted on an extensiometric load cell, making possible the visualization on the digital display of the current force applied at each moment of the test (grams). The motor and tip units are mounted on a pivoting stand preventing any excess pressure on the animal paw.

The Control Unit makes possible the adjustment of the force transducer, balance and reset, as well as the selection of the step-motor current speed.

A remote foot-switch controls the motor turn on / off allowing rapid hands-free experiments. An automatic system is activated once the distal extreme of the sliding support track is reached or when the pedal is released at the test ending point. Then, the motor reverse its rotation at its higher speed, sliding up the conic tip again.

The optional SEDACOM software (new version 2.0 available) can be used and represents an easy and convenient way to visualize and export the data on a computer for further analysis.